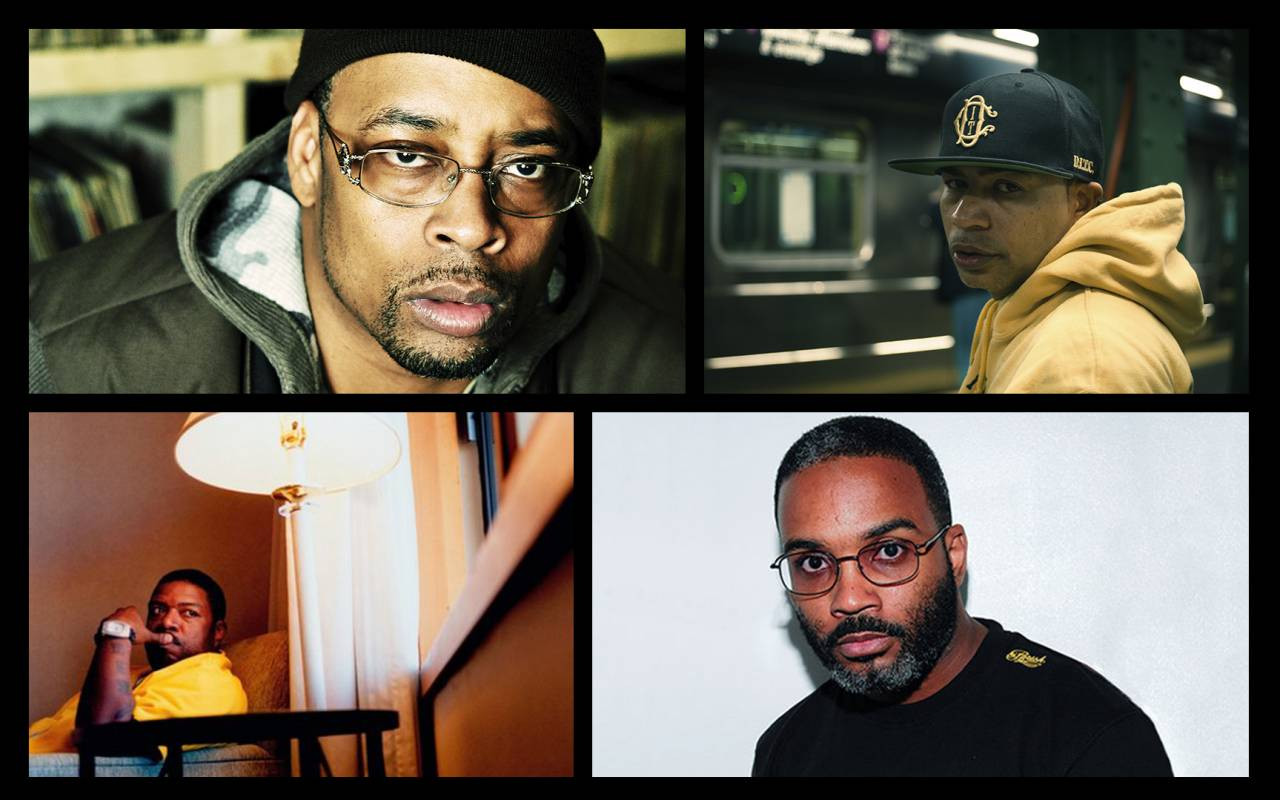 Is a grammy award winning hip hop producer and MC from The Bronx, New York City and one of the founding members of legendary NY crew D.I.T.C.[1] He started out as a DJ for Jazzy Jay back in the late 1980s and was at the same time perfecting his skills in beat making and turntablism, and together with rhyme partner Master Rob he was one half of the group Ultimate Force. The group got signed by Jazzy Jay to Strong City and Diamond and Rob started recording their debut album, I’m Not Playin’, in 1988 and released the 12″ single with the same title which spawned a buzz in the underground. The album was completed in 1990 but got caught up in label politics and was shelved until 2007 when it got released through Traffic Entertainment.

One of the last songs recorded for the album was a Diamond D solo song where he actually picked up the mic for the first time, the song was called “The Best Kept Secret”. As Ultimate Force dissolved, record executives got their eyes on the Bronx phenomenon which eventually resulted in the release of Diamond’s debut album Stunts, Blunts and Hip Hop (released under the moniker Diamond & the Psychotic Neurotics) in 1992 and being signed to Violator management headed by Chris Lighty. The album is considered to be one of the finest D.I.T.C. solo LPs and features early appearances from Big L and Fat Joe.Fat Joe 1st LP, Represent, was mainly produced by Diamond D who is credited with discovering fat Joe.
Diamond’s second album, Hatred, Passions and Infidelity, was released in 1997 to mostly positive reviews. Following the release Diamond established his name as a sought-after producer after providing impressive beats to hip-hop legends like Busta Rhymes, Fugees, KRS-One, Queen Latifah, The Pharcyde and Brand Nubian amongst others.He is credited with being one of the 1st hiphop producers to work with artists on both coast. In 2003 he released the independent mixtape Grown Man Talk,and in 2005 he released the official mixtape/compilation The Diamond Mine as well as contributions to his D.I.T.C. cohorts’ projects including the crew’s self-titled 2000 debut album on Tommy Boy/Warner Bros. Records.

In 2006 Diamond Co-produced with Dallas Austin “Day Dreaming” for Natalie Cole, which was nominated for a Grammy.

In 2008 Diamond signed with Babygrande Records. His fourth album, titled The Huge Hefner Chronicles, was released in October 2008 and unlike previous efforts the LP showed Diamond focusing more on his rhymes as production was handled by other respected underground beatmakers like Nottz, DJ Scratch, Ill Mind, Def Jef and Jesse West.

As a member of Brand Nubian, Sadat X (born Derek Murphy) was one of the key MCs who related messages inspired by the Five Percent Nation. Two years after Brand Nubian’s third album, Everything Is Everything, he made his solo debut with Wild Cowboys, which built on his lyrical reputation on top of tough, jazz-inflected arrangements. The album, featuring production from Diamond D and Buckwild, was a solid solo debut that didn’t quite scale the heights of his legacy with Brand Nubian. No Better Way, also released in 1996, improved on the debut and was produced by a cast that opened up to include da Beatminerz and Pete Rock. Sadat teamed back up with Brand Nubian for 1998′s Foundation, but he didn’t appear again as a solo artist until The State of New York vs. Derek Murphy, an EP released on Relativity in 2000. With a full-time job as a special-education teacher, it took five years before his next album, 2005′s Experience & Education, was released, but 2006 saw another full-length, Black October, which was recorded while Sadat X awaited the possibility of prison time for carrying a loaded gun. ~ Andy Kellman, Rovi.

Is the stage name of William Paul Mitchell (born March 21, 1972), an American hip hop rapper and record producer also known as Large Pro and Extra P. Based in New York City, he is known as a founding member of the underground hip hop group Main Source and as mentor and frequent collaborator of Nas. About.com ranked Large Professor #13 on its Top 25 Hip-Hop Producers list.

Large Professor started making his earliest beats with two turntables, a Casio SK-1 sampler, and pause-tape cassettes before his mentor Paul C taught him how to use an SP-1200. In 1989 he joined the group Main Source, which also included Toronto natives K-Cut and Sir Scratch. In 1990 Large produced several tracks for Eric B & Rakim’s Let The Rhythm Hit ‘Em, including “In The Ghetto”. To make “In The Ghetto”, he sampled directly off of a cassette tape of sample ideas Paul C had made for Rakim.

Main Source recorded one album with Large called Breaking Atoms, which was released in 1991. It included hits such as “Just Hangin’ Out”, “Looking at the Front Door”, and featured Nas’ first public appearance on a track called “Live at the Barbeque”, along with Akinyele and Joe Fatal. Large Professor now considers “Looking at the Front Door” one of the most emotional records of his career, later saying “That’s a deep record. At that time in life, I was eighteen years old. It was a kid with a pure heart, just writing, and putting his soul out there for the world.”

In 1992, their success allowed them to record “Fakin’ the Funk”, a track on the White Men Can’t Jump motion-picture soundtrack. Because of business differences, Large and Main Source quietly parted ways and Large went on to sign with Geffen/MCA Records.

During and after his tenure with Main Source, he worked with Pete Rock & CL Smooth, and he produced a number of tracks for Nas, Busta Rhymes, Masta Ace, The X-Ecutioners, Tragedy Khadafi, Big Daddy Kane, Mobb Deep, A Tribe Called Quest, and others during the 1990s.[citation needed] During this time he handled a significant amount of production on several projects for other artists. In 1993 he produced Akinyele’s entire Vagina Diner album, which experienced some modest commercial success at the time of its release. Though the album did well at first, The Source later wrote an article criticizing the song “I Luh Huh”, in which Akinyele considers pushing his pregnant girlfriend down the stairs as a form of abortion. The ensuing backlash for the controversial lyrics hurt the album’s performance. Akinyele wrote a response in the next issue defending the song and pointing out that the violent ideas in the songs are just thoughts, and he ends the song by saying “Just cause I talk this shit don’t get me wrong, Yo, I still luh hur.”

Large Professor also produced “Keep It Rollin’” on A Tribe Called Quest’s Midnight Marauders not long after he left Main Source. This was a major moment in his career that helped him reach a new level of credibility and exposure as a solo artist.

In 1994 Large Professor produced three of the ten songs on Nas’s Illmatic (“Halftime”, “One Time 4 Your Mind”, and “It Ain’t Hard To Tell”), the most of any producer involved with the album. According to an interview with Busta Rhymes, the “Halftime” beat was originally intended for him. Thought he liked the beat, he didn’t end up using it and later regretted it after hearing “Halftime”. While describing the making of the song in an interview Large Pro said, “I mean, we just wanted to put something gritty out there to the world, and those drums—that’s what it was at that time. It was that gritty, muffled out, because the Hip Hop that we grew up with… We grew up with park jam tapes and things like the fidelity of these tapes.” He was so instrumental in the making of Illmatic that Nas wanted to give him an executive producer credit, but he refused.

In 1996 Large Professor completed his debut solo album The LP for Geffen Records. After several delays, the album was shelved and later released as a bootleg version in 2002. An official release of the album finally came out in 2009, thirteen years after its original intended release date.

In 2001 Large Pro produced “You’re da Man” and “Rewind” for Nas’s Stillmatic album. He first played Nas the beat for “You’re Da Man” while Nas was working on Nastradamus a few years prior. Nas chose the beat but decided to save it for a later project. Large Professor also used the same vocal sample from the chorus on the song “The Man” for his 1st Class album.

Andre Barnes, better known by his stage name AG, is an American rapper from The Bronx, New York. He is best known as a member of the hip hop duo Showbiz & A.G. with producer Showbiz, and he is also a member of the collective Diggin’ in the Crates Crew. He made his debut on two songs from Lord Finesse’s 1990 album Funky Technician, and first met Showbiz while working on the album. Showbiz & A.G. have had a partnership that has lasted twenty years and released four full-length albums.
After Showbiz & A.G. separated to pursue solo projects, Barnes had an inconsistent early solo career that began with the moderately reviewed and commercially unsuccessful The Dirty Version in 1999. Seven years later, he released the better received Get Dirty Radio, but was still unable to achieve much commercial success. After releasing a collaboration album with fellow D.I.T.C. member O.C. in 2009, Barnes founded the label Red Apples 45 with producer Ray West. Since his time on the label, Barnes has had a more illustrious career, releasing multiple EPs in the past few years. He also reunited with Showbiz, and the two have released two albums and an EP since their reformation.