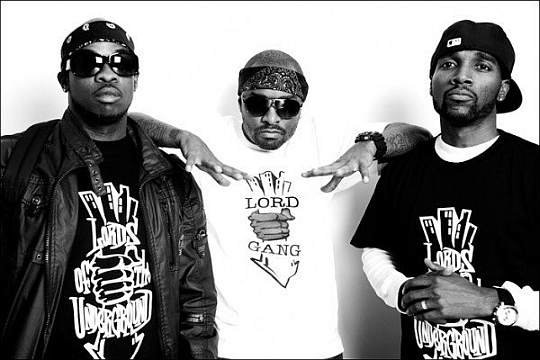 Though their name might imply violent gangsta rap, Lords of the Underground match socially conscious raps with hard hitting beats.Newark NJ ‘s Doitall/Du Kelly and Mr Funke/Funk Machine met Cleveland native DJ LordJazz at Shaw University in North Carolina.Together their union has become part of Hip- Hop history.”I remember( L.A) Derek Jackson telling me to get a group together and he was gonna let Marley Marl hear it” Dj LordJazz says. House of Lord’s “L.O.T.U.G’s official fourth album LP is under construction.After platinum and gold success with “Here come the Lords”,”Keepers of the Funk” and underground honors for the limited released” Resurrection” L.O.T.U.G has not lost a step.Touring,doing Hip-Hop seminars and performing with Hip Hop’s elite. In preperation for the long awaited Lp, DJ Lord Jazz who now resides in Paris,France as well as America is also the DJ/Producer for L.O.T.U.G,he also grabs the mic occasionally for a verse as he did on the classic “LordJazz Hit Me One Time(Make it Funky)”. He has created a new series of mix tapes called “Hertbeat of the Ghetto” its a compilation cd wich will be given in three installments before the unveiling of “House Of Lords”. Volume 1 features group member Doitall/Du Kelly who is probably remembered as the guy who wore a pamper in the classic video clip “Funky Child”. Doitall also went on to become a producer/writer /actor and a businessman,working with legendary Quincy Jones and up & coming artists.Doitall has been on numerous programs/tv shows such as “Law & Order”,”Oz(HBO)”,”New York Undercover”,and in Indy films like” Durdy Game”,”Somewhere in the City” with Bai Ling & Sandra Bernhardt,”Cross the Line with Taye Diggs and Hill harper.The Heartbeat of the Ghetto vol 1 features: The Outsidaz, Spice 1, Goldie Loc of Snoop Doggs group The Eastsidaz, Jamalski, Roudy Rahz, Mr Funke and Passi(French Artist) Volume 2 will feature group member Mr Funke (Funk Machine)who is probably remembered for his high pitched word play.Although seen the least out of the trio his presence on volume 2 is definitely felt .Funke man’s love is performing and says “Im amazed when legendary performers like Run Dmc, Krs 1, and George Clinton come to us after our shows and say that our performance was incredible,Thats an honor to me because i love what they have done for music”. Volume 1 and 2 feature the groups MC’s on a solo outing,a strategy that DJ LordJazz thought of to reintroduce the group member by member ,were as Volume 3 presents classic’s from The Lords, unreleased tracks which will rebuild a house for Lords on the block of Hip-Hop. Legendary producer Marley Marl who has worked with L.O.T.U.G since being introduced by Derek Jackson(Scott Storch manager),is working with them on their fourth coming Lp “House Of Lords” says ” It feels like Hip Hop has come home!”