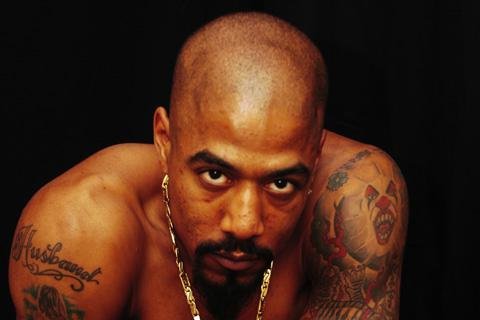 Afu-Ra aka “The Poisonous Taoist”, Hip Hop artist from New York City, is also a devout student of the martial arts. Born to a mother from the southern state of Alabama and a father from Trinidad, he connected with music at a young age through his parents who were into all sorts of music including disco, calypso, R&B, classical, funk and soul.

His music is versatile with uplifting lyrics. Since his 1994 debut, Afu-Ra has fused classic East Coast hardcore with the sensitive, intelligent wordplay expected from a committed philosopher.

Afu-Ra differs from cliché-rappers rhyming about the bling and thug style. He brings a dynamic blend of tough street speech, Eastern mysticism, and existential anecdotes, catering to an audience that, especially in our days of gangster rap, appreciates ambitious lyrics.

Hip Hop often is connected to religious or philosophical ideas and is open to all sorts of movements supporting the willing apprentice in the search for self-awareness. Afu-Ra is a good example of that. With his insightful lyrics and his Taek-Won-Do enthusiasm, he follows the tradition of “Wu-Tang members” GZA and Masta Killa or his early mentor Jeru The Damaja, but he is also connected to the Rastafarian faith and therefore close to reggae culture, Bob Marley being his biggest inspiration. To top it off, his name Afu-Ra stems from the Egyptian “Book of the Dead”.

“Me and my name found each other,” Afu-Ra explains, “I was at a point in my life when I was a savage in the pursuit of happiness, I was unsatisfied with myself and saw changing my name as a tool to turning over a new leaf.”

“Afu is the body and Ra the force that greates all life “, Afu-Ra explains, “In the book there is a story about a man in a boat that was surrounded by a huge snake and the water around him was aflame. In spite of this hopeless situation, the man stayed calm and focused and finally his spiritual powers brought him to a safe place. At a point when my life was drifting into chaos, this story helped me to achieve that inner peace in life, to maintain the ability to always be able to lift yourself out of the worst type of situations. I changed my life style and started to approach things from a more positive angle.”

“In high school, I was the cat who always had the walkman on and was reciting everybody else’s lyrics,” reminisces Afu-Ra. “Then one day, my friend Jeru said that since I knew other MC’s lyrics so well, I should start writing my own rhymes.”

Scoring an album deal, Jeru decided to unleash his protégé on his 1994 release “The Sun Rises In The East”, on a cut that Afu-Ra conceptualized, called “Mental Stamina”. This successful collaboration gave Afu-Ra the confidence that he could view rapping as a long-term career goal.
Due to his friendship with Jeru, Afu-Ra became a member of the Gang Starr-Foundation, alongside artists like Bahamadia, Group Home, Big Shug, M.O.P, Freddie Foxx, NYGZ. Their headquarters were the legendary D and D-Studios in NYC.

“After the release of Jeru’s album in 1994, we went on tour and from the audiences around the world I got a lot of real positive feed back, and they all wanted to know when my own album was coming out!! That gave me a lot of energy and faith in my skills!”

Afu-Ra was also featured on Jeru’s second album “Wrath of The Math”, before he finally started working on his solo career. “It was time to go my own way.” In 1998, he released his debut single “Whirlwind Thru Cities,” an underground favourite, reaching the top 20 on Billboard’s Hot Rap Singles chart.

In the following years, Afu-Ra drew attention through releasing several singles and through guest appearances, for example on the “Ghostdog” soundtrack, all of which were produced at D and D Studios. Members of the clique there were diverse MCs such as Freddie Foxx, Krumba Snatcha, Inspektah Deck, Big Shug and Cocoa Brovaz, as well as the producers Lord Finesse and Tru Master. Also Gang Starr’s Primo dropped by occasionally.

After some label quarrels, the year 2000 finally brought the release of Afu-Ra’s debut album “Body Of The Lifeforce”, produced by Tru Master, DJ Premier, DJ Muggs (Cypress Hill) and the Beatminerz. On this highly acclaimed album, artists as Ky-Mani Marley, M.O.P., GZA, Masta Killa, Cocoa Brovaz and the late Big L are featured. After playing henchman on Jeru the Damaja’s first two albums, Afu-Ra stepped into the solo spotlight with this solid effort.

Afu’s spiritual vibe and personal enlightenment are evidenced on his debut album. You’ll find no tales about cars, money, and fashion on this CD, as Afu-Ra appears to be aiming for a higher plain. “I’m a well-rounded artist. I can do party jams or battle raps, but the key is that whatever style of music I bring–I’m always gonna drop jewels. No matter what, I must deliver some informative knowledge in my lyrics.”

Afu-Ra claims the success of his debut was due to the friendship and respect the contributors had for each other. “I am a big fan of the artists who supported me with this album and have a personal relationship with most of them. Love and respect are a strong force in producing a hot record. That didn’t have anything to do with the usual rap-game.”

Afu-Ra’s debut “Body of the Life Force” was followed by the successful albums “Life Force Radio,” in 2002, “Perverted Monks” in 2004 and “State of the Arts” in 2005. In 2002, Afu-Ra founded his own label Life Force Records and the companies Life Force Industries and Life Force Apparel.

Since he started in the rap business in 1994, Afu-Ra has toured the world. Being a charismatic performer with a lot of stage presence, and an ability to move the crowd, his concerts are always a big success. He is known for giving everything during his shows and integrating Taek-Won-Do into his stage performances.

Afu-Ra used to be called “The Emcee with the Longest Dreads” in 2006 he decided to cut off his hair for no special reason, just for a change, but since then has been faced with the question of whether he changed his religion. “I just cut my hair cus’ I wanted to! I just needed a change. I am not part of any religon my religon is the way I live. My philosophy of life doesn’t change with my haircut!”

Afu has many fans around the world, especially in Germany. On his “State of The Arts” album he collaborated with the German artist Gentlemen on the song “Why Cry” and the German producer, Tobster, on the new “Voice of a Legend” LP in addition to many others.

Afu-Ra draws his inspiration from all kinds of music. He loves to listen to Hip Hop, R’n B, reggae and dancehall, but also gets inspired by rock ‘n roll, jazz, blues and soul and might even fall in love with a drum & bass track or a country song. Music is complex and he doesn’t want to be limited.

From his first album to the latest one “Voice of The people,” released early 2008, Afu-Ra matured. He has even higher expectations for himself now. It’s important for him to see his work improve. With his new album he has reached a higher level. This is a goal he has for everything in his life–to strive to be the best he can in whatever he does. “It is you who will change the world with the positive actions that you take in this life. I believe that whatever you do, your actions will effect your surroundings. I know that & I will forever want to make positive changes.

There are many artists in the world but just 1 Afu-ra. Fraom Germany to NEW YORK to France to Spain Afu has been in search of the sparks to influence the writeing and production of a long awaited NEW ALBUM. While the climate for great music is at the perfect tempeture Afu-Ra is in the kitchen prepareing 4 chapters of new music. The first will be ready this comeing feb, that is if the world doesn,t end!!!