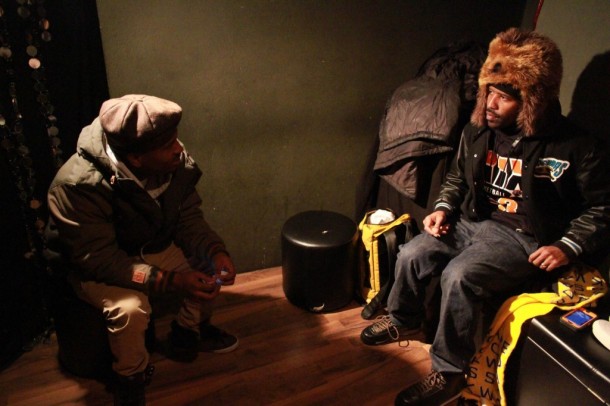 Interview with Fashawn and Murs by Mic Movement

Interview with the duo before show in Bohannon, Berlin

MM: Okay, so – “life a shorty shouldn’t be so rough”.
Fashawn: It shouldn’t, but somehow, for some of us, it is.
Fashawn: That was one of the first songs I recorded with Exile, the man who produced my first album, that was like one of the first songs, that we heard, and I recorded it and he was like, “yo we might have to do a whole album”, you know what I’m saying, so, yeah man, thats just a song, thats just a honest memoir of my life, its really direct, theres nothing metaphorical about it, its just, really a biographical piece on my life.
MM: Did you catch any flack for that song from like, your peoples? Were they like, thats a lil bit too much truth?
Fashawn: No. I live my life out there like that, like my whole life has been an open book. I remember growing up, my parents get into it, mom and my stepdad at the time get into it, and the whole like neighborhood was watching the scene. We would just have to deal with the embarrassment. Basically I grew out of it and was like, yo like, fuck it, like this is my life, you know what Im saying, so, and my whole family caught on as well. And the song is really lighthearted, even though I’m talking about some really foul shit, its really light hearted, you now, so, they kinda laughed when they heard it. I guess to stop from crying, you know? Like they say, it’ll make you laugh or it’ll make you cry? So I was talking bout some harsh stuff but when they first heard it they were like “aw, i remember that” so no flack at all, no.
MM: So your style has a lot to do with truth telling and everything like that.
Fashawn: I would like to think so, yeah.
MM: Do you ever find yourself sorta censoring yourself, like nahw I can’t say that.
Fashawn: Uhm, nahw, not at all. Once I arrive at that point, I know I should say it, you know, thats when I know I should say something. If someones telling me like “ahh” that excites me, you now so, yeah, I live for that. I never censor myself. Never.