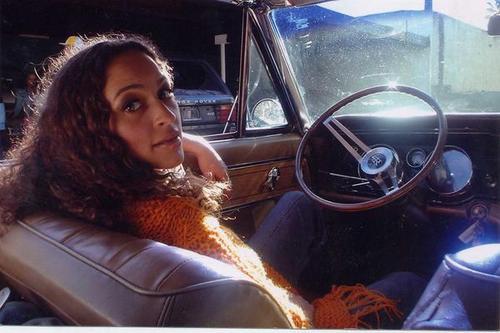 Thank you very much for the wonderful show a few minutes ago. How are you feeling?
Like I said (during the show) it took me 24 hours to get to Berlin. Also it’s really different with a deejay that i don’t normaly work with. So there is like certain queues that I might be looking for in the music. But people have been really forgiving and great about it.

You said that it’s your first time ever in Europe…So you must be very excited.
It’s my first time here and the most that I really done is spent the time at the airport. But tonight was lovely and the crowd was amazing. I was really excited to get here and I am here for two weeks. I am coming to a different part of the world and I’ve heard such wonderful things about artists communities out here and this part of the world in general.

You are originaly from Oakland, California. What do you think are the differences between the Westcoast and the Eastcoast?
Well, these are two different lifestyles. The Eastcoast is a lot colder and there can be a lot harder in one sense. And the Westcoast is a lot more laid-back. But it also can be an extremely violent and cold place. You know I think people respond generelly over all to good music, but people like to hear their lifes reflected in the music that they are listening to.

I missed one of my favourites joints tonight called “Once A Week” of your “Cuts For Luck and Scars For Freedom” Album. Isn’t it too offensive asking a man directly “Do you wanna fuck?” Could you explain the writing of that song and how it came up?
Oh, I never performed that song, but thank you. Maybe a couple of times I had, but I don’t generally perform that. And what I am generally saying is that i am not asking using the man for a commitment and I am not trying to lock you down, but we can hook up and we can spent some time. And as long as you don’t ask me for a comminment then we are cool, but when you try to pressure me than I’ll just cut you off and I’ll be on my way.

Do you have a favourite track on the “Cuts For Luck and Scars For Freedom” album?
That’s a hard question, ‘cause they are all my babies. I really love “Neptunes Jewels”, “Fatherless Child”, the one about my dad…

You mentioned “Fatherless Child”. Isn’t it hard to write about such an emotional personal experience?
No, cause they usually come at the time when they are ready and they are supposed to come. You know, I think a lot about it before I write it. And then when I sit down and write, it just comes out.

When creating a track, do you have a pre-conceived theme and pre-written lyrics? Or, do you start with an idea or the beat first?
Well sometimes I start writing in my head first and then I am looking for a specific piece of music. But more often these days I listen to the music first and then I’ll get together with the producer and say “This is how I am feeling today” and then we are like “What about this?” and he’ll be “That works completely”. It’s a very flexible process.

There is a lot of negative publicity concerning Hip Hop these days, do you think that there is more negativity than positivity in reality?
I think that it (Hip Hop) needs to be more diverse. Because the thing sometimes that I think are pieces of positive music other people are not going to think that are positive pieces of music like giving a portrait of a certain lifestyle. Hip Hop has always been about THE style. But it definitely needs to be more balanced. It’s a business and people are trying to make a profit and for a label that it’s not making a profit that it’s not really working. I don’t know about over here (Europe), but definitely in the States if we really wanted to we could have more control as listeners, as consumers. You can listen to 15 minutes of radio and what you gonna hear about is cars, guns and a lot of direction been given to women about how they can touch themselves, they can take off their clothes, they can shake their asses. The direction is given and it’s gettin a little old to me.

There are many female emcees today that are so bent up on maintaining their image and showin a lot of skin…
Well if the women choose to act like that and it’s not the label telling them to do this… But you know, I love Lil’ Kim’s first album. I wasn’t offended, that’s not me, that’s not what I do. I think there is room for it. And we constantly have the discussion about women who are doing it, but there are so few female artists, I don’t really think that we are really influencing the masses of young women to portrait themselves as hoes or whateva…

Do you ever/always classify yourself as a “female MC”?
Well I mean, I am a woman. I wouldn’t try to seperate the two. I am a human being, a woman and an artist before I am an MC. So i don’t mind being labeled that way. But I don’t have an issue with the term. You know I am an female MC.

Do you think it’s important to “educate” the young people about the roots of Hip Hop and about “sampling” being a huge part of that culture?
I think sometimes it brings people into what happened before in history. We have shows in LA on the radio where they specificly play the new joints and where they got taken from. So they try to educate people about where it comes from. I personally tend to like the older ones better, but that’s just me. You know one thing that it’s really important for people to know the history of Hip Hop if they are going to be involved in the craft to a certain extend. I think that for those of us who grew up in it and are older, sometimes I really don’t think it’s fair for us to expect this young kids when they weren’t growed up around them to know everything about it.

What words/advices do you have for upcoming and unknown female MCs?
That’s the same advice that I would probably have for young male artists, which is to carry yourself with respect, to be creative. But I guess specificly for young women don’t expect people to give you anything or do anything for you simply because you are a woman. Expect it because you are that dope and because your art is dope. Educate yourself about the business and about the industry. We all wanna be creative, artistic people, but one of the best ways that we can protect ourselves as creative, artistic people is to understand the business.

I read that you are taking an english class, a jazz class, a modern dance class, and a choreography class. Tell us more about it?
Oh yeah. Well, the reason that I am back in college and that I am studying is, because I want to open a community art center that teaches living skills to artistic expression and I also want to open an elementary school. I just think it’s really important. I love kids! Long before I had a deal I was teaching, so it’s one of the other loves of my life and my passion. We need to take care of the kids, it’s our job.

That sounds very intresting and important, indeed. You seem to follow multiple dreams at once. Are this projects in process yet?
No, they’re not in process yet. I really need to finish my degree. But there are definetely people who are supportive and who I am communicating with, who are interested in workin’ with me on the projects. But it’s a long path.

From where do you get your inspiration to stay creative, to keep your faith alive and never give up?
Probably my biggest influence have to be my mum. My mum is a teacher, she is an amazing woman, a political activist, she is very concerned about the world, she raised me that way and passed it on. So she will probably be the greatest person I know.

That’s beautiful. So she stands 100 % behind you when it comes to music, art, your future projects, I guess?
Oh absolutely (smiles) ! She likes what I do. She appreciates the honesty. She really just wants me to be healthy and to take care of myself and she doesn’t want me to be involved with negative people in the industry. She surprises me sometimes, cause she be like “They are not supposed to do that” and “That’s not the way it’s supposed to work”. And I am like “How do you know that, mum?”

What can people expect from you in the future?
Well, my future plans are to put out the next album, which is just about done. It needs to be mixed and mastered. I haven’t said the title yet. It might change. I wanna get that out. Then-school. Really, this is what people can expect from me.

Do you have any final words?
Thank you for giving me the opportunity and welcome me in Berlin. I had a wonderful time. Thank you.
Thank you Mystic for this nice interview!